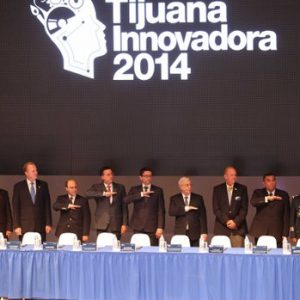 TIJUANA — Outside, the old houses, faded wood fences and crowing roosters offer a glimpse into Tijuana’s past. But inside the modern four-story MIND Hub building, the vision is of Tijuana’s future — one of high-tech startups that transcend borders and offer opportunity for those with ideas and ambition.

While manufacturing remains Tijuana’s driving economic engine, a new generation of entrepreneurs is striving for a different path to prosperity. The tech incubator MIND Hub is part of a fledgling ecosystem that aims to make that happen.

Amid a global flourishing of tech companies and other startups, the 10-day Tijuana Innovadora conference showcased these and other ventures that expand the city’s horizons. Last month, there were numerous panels, conferences, workshops, exhibits, seminars — all with the aim of creating a buzz about Tijuana, one that organizers hope will find an audience in San Diego.

Topics as diverse as the Mexican diaspora, child migration, car racing, climate change, philanthropy and technology are on the schedule. Speakers include scientists, bankers, diplomats and CEOs. In the end, the purpose of all the bustle and talk is to make the point that for all its challenges, Tijuana is a place with much potential.

“We want to bring our young people to the edge of ideas,” said José Galicot, the 77-year-old president of Tijuana Innovadora, a businessman who built his wealth through telecommunications and real estate.The first Tijuana Innovadora conference was held in October 2010, as the city struggled to emerge from years of drug violence and rising unemployment. A second event was held in 2012.

This third incarnation of Tijuana Innovadora links to a series of related independently organized events that include the Culinary Battle, a celebration of the region’s exploding range of food offerings, and a fashion show, Innovamoda, that highlights city’s upcoming designers. Two other events, TEDx Tijuana and PechaKucha Tijuana, will feature local residents with something to say about the city — including architects, migrant advocates, a shoe designer and student musicians.

For the tech-minded, a group called CampusLink brought together 2,600 student software programmers from both sides of the border on Oct. 21 for a 12-hour competition known as a “mega-hackathon.” And a Tijuana Startup Weekend  at a coworking space called Hub Station on Avenida Revolución gathered 80 aspiring entrepreneurs who to tested their pitches.

The name Tijuana Innovadora begs the question: Where is the innovation taking place in the city?

“You can’t say if it’s innovation, but certainly you see a lot of things going on in the creative class,” said Omar Jacobo Monroy, a 30-year-old attorney and intellectual property specialist. “I call it the platypus city, it’s still in evolution, and you can’t figure out if it’s a duck or a beaver.”

The most obvious sign of innovation is the city’s food scene, which has been instrumental in changing the city’s narrative from one focused largely on crime and violence. But another key area that points to the emergence of a new Tijuana is the buzz about startups — businesses that can be launched with little capital, have market appeal beyond the city’s boundaries, and carry the potential for rapid growth.

“Five years ago, you didn’t even speak about startups, now you’re able to see companies. Even if they don’t have anything, it’s people trying,” Monroy said.

The world is changing — and while maquiladoras account for close to 60 percent of the jobs in the city, many are seeing future opportunities for growth outside the industry.

“Some are waiting for a new wave of maquiladoras to come here to stir growth, but we all know we’re not going to get a huge wave of those,” said Claudio Arriola, director of the Tijuana Business Innovation and Technology (BIT) Center. “It’s more about services. A lot of the creativity that happens in Tijuana is because it’s a melting pot from all over Mexico.”

The cross-border connection is key to the future, and one company that will be highlighted at Tijuana Innovadora is the drone manufacturer 3D Robotics, which has its manufacturing facility in Tijuana. Launched in 2009 with venture capital, the company grew out of a collaboration between Chris Anderson, editor of Wired Magazine, and Jordi Muñoz, a self-taught specialist in unmanned aerial vehicles who was born in Ensenada and grew up in Tijuana.

Also featured was MIND Hub, which was launched in 2011 by ArkusNexus, a company that does most of its business developing software for U.S. companies. MIND (Mexico Innovation and Development) Hub last year became the first tech incubator in northwest Mexico formally certified by the federal government’s National Entrepreneurship Institute.

“There’s a lot of hits and misses in this. The majority of things that are going to come up are not going to make it,” said co-founder Jorge Arroyo, a 37-year-old software engineer. “But there’s a good chunk of people brave enough to embark on this type of venture, which entails a lot of effort.”

Arroyo sees much potential in the health sector, and MIND Hub has partnered with Flavio Olivieri to launch Tuteli, a proposal for a home monitoring system geared to help families keep tabs on an elderly person living alone. It would remotely keep tabs on the individual’s movements, heart rate, temperature and other indicators

Olivieri, a 48-year-old industrial systems engineer, last July left the security of a job as executive director of the Tijuana Economic Development Corp. to throw himself fulltime into this venture.

Olivieri said the rapid economic expansion that once characterized the city has stagnated in recent years, forcing a need to change Tijuana’s traditional entrepreneurial model — of real estate, services and retail — to a different model, and tech startups offer potential for a new generation of entrepreneurs.

“A few are starting to make money, but it’s just starting,” Olivieri said.

“What’s needed is critical mass,” said Enrique Jiménez, a Tijuana music promoter known as Ejival. “There is no public policy in Tijuana that says, ‘We’re going to make Tijuana a city of startups.’”

Yet even at City Hall, there are signs of change: the creation of a one-man Office of Entrepreneurship and Innovation, with 28-year-old entrepreneur Francisco Gudiño, as its director.

The main ingredient still largely missing is money; for these proposals to flourish, they will need to find investors willing to take a risk.

“I would say where they are today with venture capital is about where we were 25 years ago,” said Bob Watkins, a San Diego-based venture capitalist and chairman of the CaliBaja Bi-National Megaregion initiative. “Opportunities exist in Mexico, if you could basically convince people to move some of their money and begin partnering with people there.”

One of those working on the funding end has been Miguel Marshall, 28, co-founder of Hub Station, with 12 office spaces and a coworking common area on the upper floor of the former Mexicoach bus terminal on Avenida Revolución.

His goal is to link promising technology startups in the region to venture capitalists in Silicon Valley and he plans to talk about the challenges and solutions of raising capital at Tijuana Innovadora.

“We are the closest emerging market to Silicon Valley,” Marshall said. “The opportunity and challenge lies on building our own technologies with a vision to expand them into the U.S. and Latin American markets, this way creating wealth and opportunities for the region.”